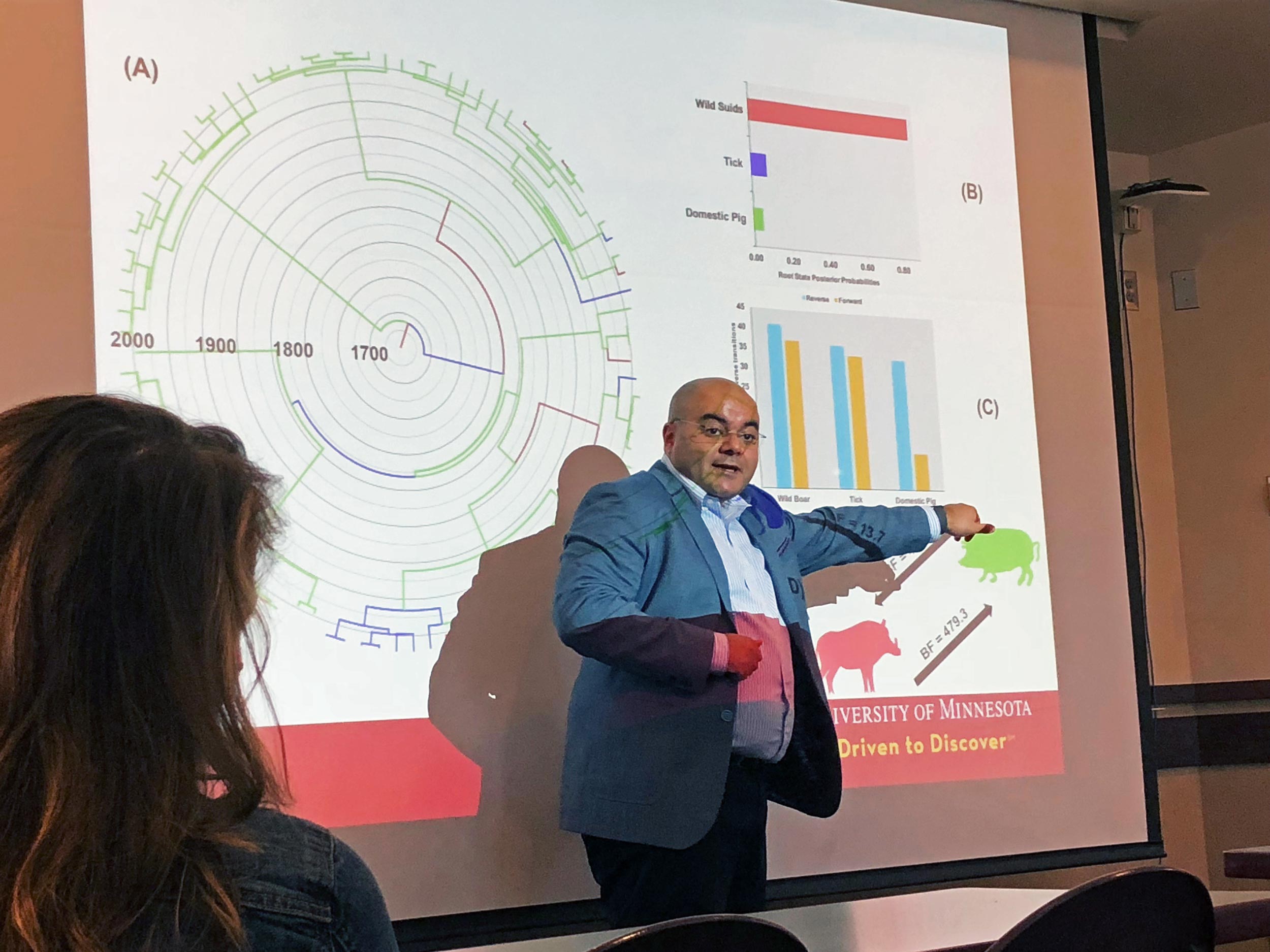 According to the World Organisation of Animal Health (OIE), 75 percent of emerging infectious diseases in humans are zoonotic, meaning they originate from animals. Understanding what drives these diseases to spread is crucial to economic, animal, and human health around the globe.

Mohammad Alkhamis, DVM, PhD, who is also an assistant professor of epidemiology and biostatistics at the Kuwait University Faculty of Public Health, joined the University of Minnesota College of Veterinary Medicine (CVM) as an adjunct assistant professor in 2015. His work focuses on novel ways to track and map infectious diseases that have extremely complex relationships with their hosts and environments. Alkhamis uses two statistical techniques, Bayesian and statistical learning, that allow scientists to factor in new data—anything including weather events, population trends, and genetic data—to calculate the probabilities for past, present, and future disease events.

“You can extract all this big data and throw it into multiple advanced statistical algorithms, and they start to make connections between this big data that’s readily available and the data we’ve collected on outbreaks, to identify origins and predict new locations of emerging infectious diseases,” explains Alkhamis.

For part of his work, Alkhamis uses Bayesian statistics on big genetic and environmental data to help researchers explore new questions about the evolutionary origins and spread of disease, such as the country of origin of a given swine disease, and how it spread between humans and animals. The second half of Alkhamis’s work uses machine learning to produce maps. A complex algorithm creates heat maps based on key factors, such as human and animal migration, or weather events, such as rain. The maps show the probable distribution of a pathogen over a geographical area.

“They include locations that weren’t sampled, but where you would probably find the disease,” says Alkhamis. “If you know where it’s coming from and what factors you need to monitor it, you have enough information to make a plan to control it.”

“There are a lot of challenges, but I am not a guy who gives up,” says Alkhamis.

Every summer, CVM’s Center for Animal Health and Food Safety hosts Alkhamis for a month-long visit to build collaborations. Alkhamis has worked with the U of M to track the evolution of diseases, including porcine reproductive and respiratory syndrome virus in the United States and foot-and-mouth disease in Nigeria. He was also responsible for an evolutionary map that quantifies the transmission cycle of African swine fever (ASF) between ticks, domestic pigs, and wild hogs—something no one had been able to do before. ASF is an economically devastating disease that currently needs an urgent development of a new vaccine, and Alkhamis’s work is contributing to this growing body of research.

“The CVM is now recieving grants to expand their new evolutionary methods, and to be the one who initiated this is one of the best moments in my life,” says Alkhamis, who thinks working with the U of M has been one of the most important experiences in his career. Though he is able to use his skills in Kuwait, Alkhamis says his resources are limited. He’s now working to establish collaborations between the U of M, Kuwait, and other Gulf countries.

“When I work with the U of M, I have concrete and fruitful collaborations,” says Alkhamis. “Kuwait is getting research help from faculty at Harvard and MIT, but when it comes to public and veterinary health, the U of M has the best people and the best resources.”