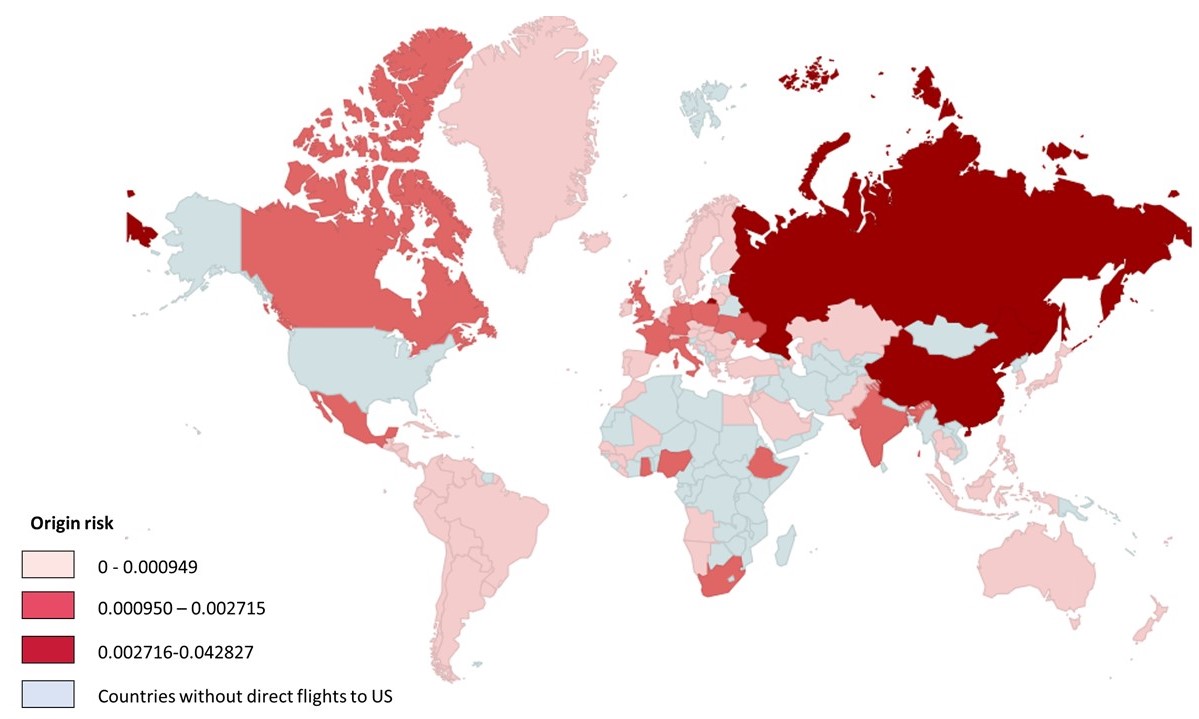 Risk results of ASFV entry into the US through prohibited swine products carried in air passengers’ luggage. Risk map where the graduated color in the map represent the annual average risk from the highest (darker) to the lowest (lighter) per country.

In 2018, African swine fever (ASF) spread into Western Europe, and, for the first time, into China affecting 28 provinces. In early 2019 Mongolia and Vietnam also reported their first outbreaks. Such dramatic change in the global epidemiological conditions of ASF has resulted in concerns that the disease may continue to spread into disease-free regions, such as the United States.

A recently published study estimated the risk for introduction of ASF virus into the U.S. through smuggling of pork in air passengers’ luggage. The study was funded by the Swine Health Information Center and National Pork Board, and the analysis was conducted by the Center for Animal Health and Food Safety, College of Veterinary Medicine, University of Minnesota (a World Organisation for Animal Health, or OIE, collaborating center on capacity building) and the Universidad Complutense de Madrid, Spain (OIE reference laboratory for ASF).

Results suggest that the mean risk of ASF virus introduction into the U.S. via air travel has increased 183%, compared to the risk estimated before the disease spread into China, East Asia, and Western Europe in 2018 and 2019.

Results also suggest it is likely (mean probability ~ 1) that ASF virus is currently reaching US airports in air passengers’ luggage, prior to customs inspection, which is consistent with the detection of ASF virus in seized pork in a number of Australian and Asian airports. Likely, the risk decreases substantially after customs inspection. Most of the risk (greater than 50%) was associated with flights originated from China and Hong Kong, followed by the Russian Federation (27%).

Data showed risk was highest in summer and five airports account for greater than 90 percent of the risk:

Results suggest the risk for ASF virus introduction into the US via smuggling of pork in air passengers’ luggage has dramatically increased in 2018 and 2019, compared to previous years. This data will help to inform surveillance strategies for the disease in the US, with the ultimate objective of preventing, or mitigating the impact of a hypothetical ASF virus incursion into the country.