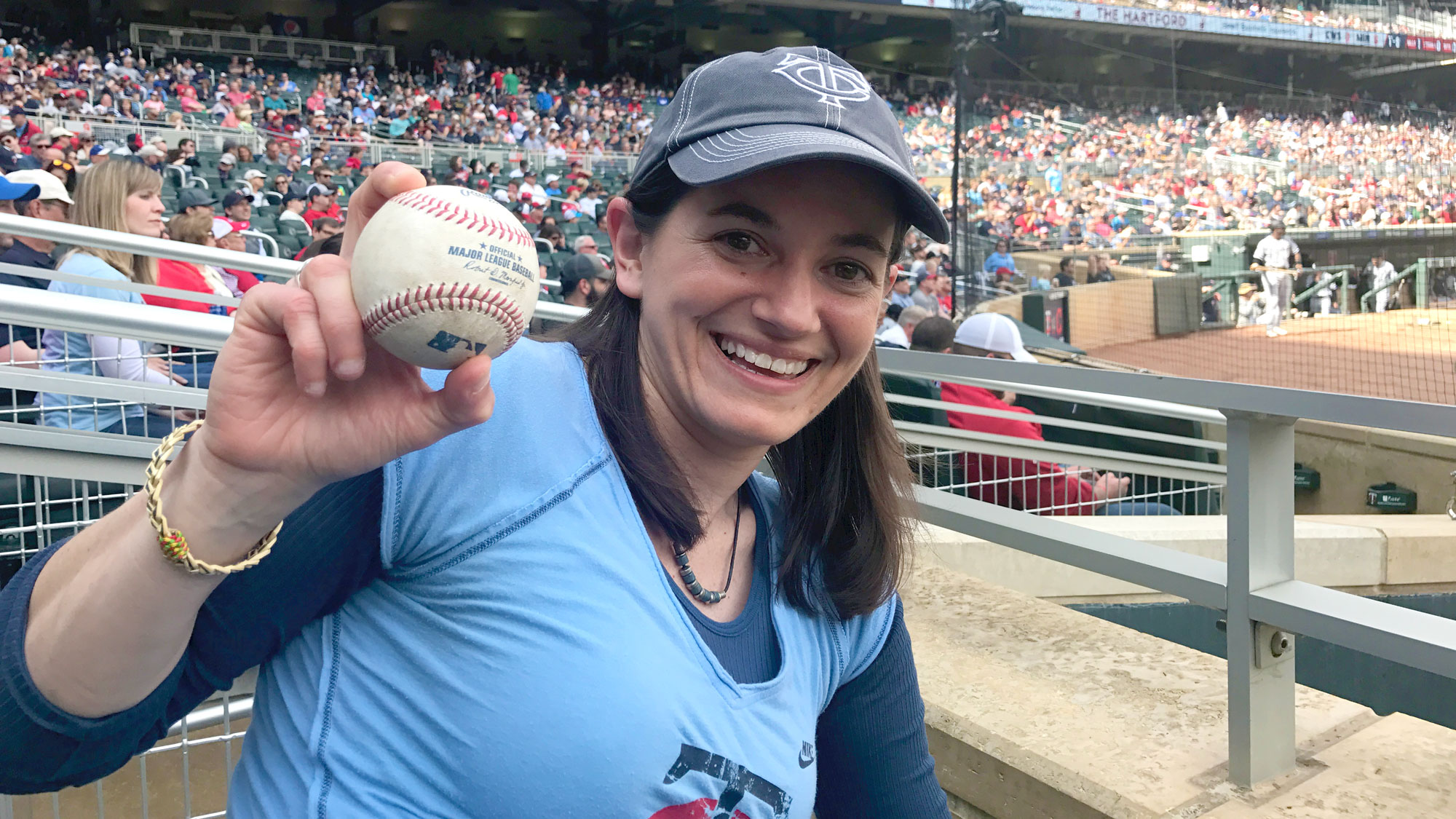 Minicucci at a Twins baseball game. See more photos of Minicucci at the bottom of this story.

Even in her absence, Larissa Minicucci, DVM, ‘04 MPH, associate professor in the Department of Veterinary Population Medicine at the University of Minnesota (UMN) College of Veterinary Medicine (CVM), will continue to shape the lives of many through her legacy, especially veterinary public health and preventive medicine (VPHPM) residents.

“Her ability to work with these residents, her knowledge of veterinary public health and her welcoming demeanor inspired me to apply to the University of Minnesota program,” says Michael Mahero, DVM, MS, MPH, DACVPM, the current director of the VPHPM residency program at the UMN CVM’s Center for Animal Health and Food Safety (CAHFS). He met Minicucci when he was visiting the university with a cohort of veterinary students and later co-taught with her. “She was somebody I never stopped consulting while navigating the professional domain.”

Minicucci lost her battle with metastatic colon cancer on November 16, 2019, a battle she fought with grit and a sense of humor.

“When I was preparing to take over the class she taught last year, between rounds, chemo and other treatments, she always showed up,” says Mahero. “That was inspiring and absolutely humbling, and that was the character she had throughout. I got to see both as a student and behind the scenes as a faculty member, her tenacity towards challenges and how she inspired others to do the same in an unprecedented manner. Right to the very last day she never stopped bringing her A-game to her work.”

Minicucci was part of the first cohort of VPHPM residents in 2002, and earned her Masters of Public Health (MPH) at the University of Minnesota in 2004. She went on to become the director of the VPHPM residency program, which allows early to mid-career veterinarians to gain specialized training in veterinary public health practice. More than 40 alumni have completed the VPHPM residency since its inception, and nearly all of them worked directly with Minicucci. Many residents who worked with Minicucci credit her for guiding them in the right career direction, noting that her invaluable advice, quality work, and commitment to community service made them the veterinary professionals they are today.

“Over the past 18 months, it’s become apparent how far-reaching Larissa’s impact really is,” says Sarah Summerbell, former coordinator of the VPHPM residency and DVM/MPH program, who worked closely with Minicucci for years. Summerbell has been on the receiving end of emails from those who were touched by Minicucci, both personally and professionally. “The emails still come in and we’re currently at 649 messages that specifically related to Larissa’s impact on someone. That’s pretty cool.”

Minicucci also directed the dual DVM/MPH degree program, the first of its kind in the country. The hands-on program allows students enrolled in a DVM program at any accredited veterinary school to simultaneously earn an MPH through the U of M. Under Minicucci’s leadership, 150 students from 22 of the nation’s 30 veterinary colleges enrolled in the program.

She was also passionately active in the Student Initiative for Reservation Veterinary Services (SIRVS), a student-led organization at CVM. Since 2009, SIRVS has partnered with Native American communities to set up pop-up community clinics in gymnasiums and community centers, to provide learning opportunities to UMN CVM students and care to animals on reservations throughout the state. The program also facilitates cultural exchange, hosting members of the Native American community at the University to speak with students about the best way to engage with their nation.

“Larissa really had a way of working with public health in a variety of ways and she brought that experience with her to teaching,” says Mahero. “I admired her ability to inspire even in a very informal setting and the way she connected with students in a way that was welcoming but at the same time challenging and inspiring.”

Minicucci was also awarded the Outstanding Student Group Advisor from the University of Minnesota and the Outstanding Faculty Award from the Minnesota Veterinary Medical Association, as well as the United States Public Health Service Crisis Response Award for her response efforts following Hurricane Katrina. She was granted the Foreign Duty Award for veterinary public health work she completed in Uganda and Madagascar. She was also the recipient of the Excellence in Course Coordination Award from the College of Veterinary Medicine and the Award of Excellence in Global Health Achievement from the Centers for Disease Control and Prevention.

Even with a wall full of awards and accolades, Minicucci kept grounded in her passion for creating lifelong learners. “Larissa saw public health in everything,” Summerbell said. “No matter what her MPH students came up with, she would help them craft their ideas into a meaningful capstone project.”

Through this outstanding work, Minicucci’s legacy will continue to shape veterinary public health at the University of Minnesota and beyond.

I owe my current career path to Larissa. In the fall of 2003, I was interviewing for the residency program and was introduced to Larissa, who was a current resident. We instantly bonded over our mixed animal practice background (and love of dairy cattle). I asked her what she was doing after her residency and she told me she had applied to the Epidemic Intelligence Service (EIS) program at the Centers for Disease Control and Prevention. I had never before heard of EIS, much less contemplated a career in field epidemiology — it was a career shaping conversation. When I started my residency in 2004, she started at EIS and we kept in touch as I decided to apply to the program as well. She was the first person from the residency to get into EIS, and I'd like to think she opened the pipeline for the rest of us! I started EIS in 2008 after completing my residency. Larissa's caring mentorship, peer support, and perspective helped me become the public health practitioner I am today.

I started my residency at CAHFS around the same time that Larissa returned to U of M as faculty. Working closely with her during this time dramatically altered my career path. Immediately, I felt kinship with Larissa. I was drawn in by her magnetic personality, impressed by her amazing stories of derring-do, and came to consider her a role model. Larissa worked hard to build a community amongst the residents and students that she worked with. At social occasions at Lou and Larissa’s home, they made us feel welcome and a jolly time could always be expected. Larissa had a great capacity to be engaging and collaborative, while also having high standards for quality work and scientific rigor. Service was built into all the work that she did—whether that was part of teaching veterinary students, making time to mentor those early in their veterinary careers, or doing outreach. Simply put, Larissa was the kind of person that you could have an absolute blast working and socializing with, while making a difference in the lives of others. I am so grateful to have known her as both a colleague and a friend. Larissa’s shining example of a brave, trustworthy, intelligent, kind, and joyful person will live on in the thousands of people whose lives she touched throughout her life. I am definitely counted in that number, and will strive to honor her memory through my words, thoughts, and deeds.

I met Larissa in 2007 when I started the DVM/MPH program the summer before my first year of vet school. I remember how welcoming she and her husband, Lou were to us and none of that had changed when I returned to the U from 2014–16. Barbecues at their home included open access to their garden to fill our fridges, “field research” on guest preferences between meat from Gold’n Plump vs. backyard raised chicken, and stories about their black lab Sammy and his job as a teaching subject for theriogenology rotations. As a resident, I volunteered to assist Larissa and the students at SIRVS clinics. I will always remember eating Cheez-Its on the car rides and sleeping on the gymnasium floor. I am incredibly grateful for Larissa’s support of my career, especially in encouraging me to go to Uganda with Veterinarians Without Borders. I remember being incredibly disappointed when I was not selected for the CDC’s Epidemic Intelligence Service, but I did get a job as the deputy state veterinarian in Delaware. Larissa was enthusiastic about this job opportunity for me and urged me to pursue it. Coming to Larissa’s office at lunchtime, one would find her eating baby carrots among her giant microbe stuffed toys. You’d be greeted with a big smile and a laugh that made her eyes light up. This is the image I will remember most about this special teacher, colleague, and friend.

Larissa was an invaluable mentor and leading star for me during and after my residency. While she gave me a ton of valuable advice throughout the years, the most memorable and influential one was when we were driving back from one of the many SIRVS trips. She had noticed I had not been as happy-go-lucky as usual during the trip. She did not pry, but somehow knew exactly what to tell me—years back, she was struggling in her personal life and feeling inadequate at work. She sought counselling and, through it, understood that it was ok to not give 110% at work all the time; that it was ok to prioritise other things in life for a moment, even when you are a hungry young professional. I’m unsure if I would have made through the residency, let alone be able to successfully pass the DACVPM board exam, without those words. Her mentoring allowed me to let go when needed, and come back to the work when I was able to, without feeling guilty. It was a huge privilege to know Larissa, who influenced my life and career in countless positive ways.

Larissa and I first became acquainted shortly before I started the VPHPM program. We were attending a tri-state disaster response training in La Crosse, Wis., and were paired as roommates. Our first encounter was a humorous series of events involving a late night check-in, a room key that didn’t work, and a mouth guard. We hit it off immediately, and that was just the beginning of how Larissa would leave her mark on my world. I truly believe that some people come into your life at the right place and at the right time to help guide and sculpt you on your journey. Her patience and positivity not only helped me develop new skills, but also motivated me to be a lifelong learner. I continue to be impressed by all that she accomplished in her short time on Earth. I am grateful for the continued friendship that we maintained after the residency. Just a few years ago, Larissa stopped to visit me when passing through Willmar on the way to a SIRVS trip. We enjoyed some pizza on the deck, told stories, and were able to catch up like old friends. While losing Larissa is painful, I cherish her memory and thank her for all of the positive ways she impacted my life. 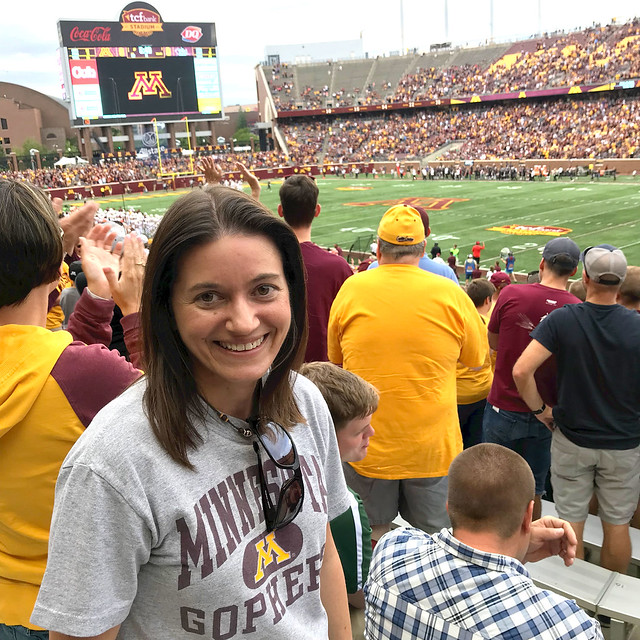