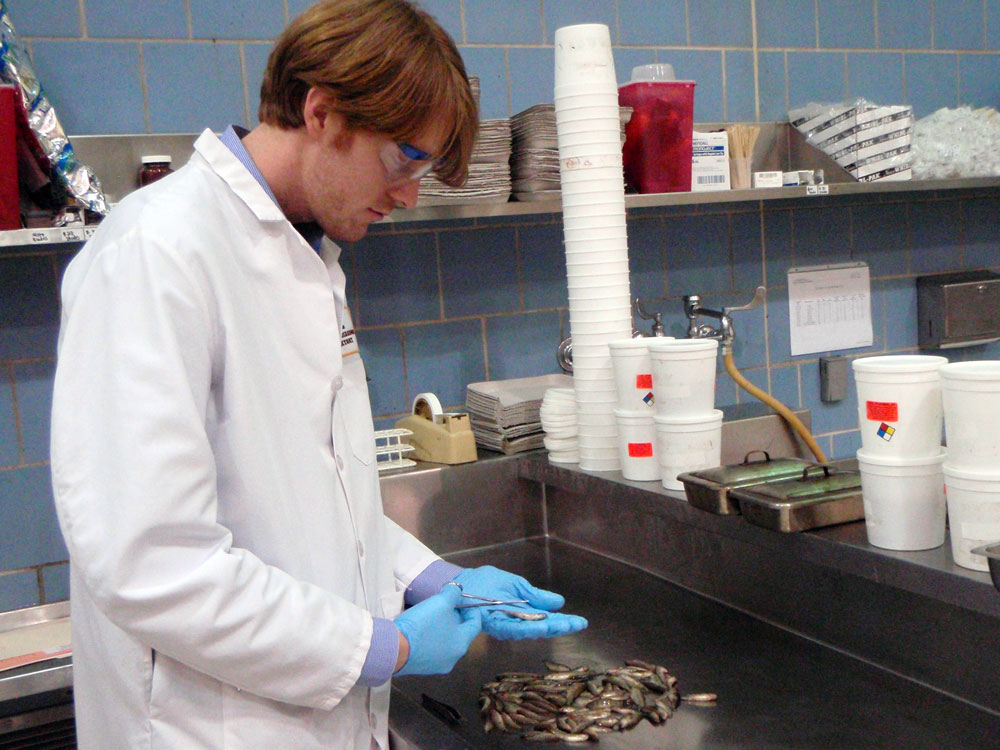 For decades Minnesota’s aquaculture industry has raised fish for sport fishing— including some 350 million walleyes stocked each year in Minnesota lakes, about 1.7 million trout in isolated lakes and cold-water streams, and baitfish to supply state anglers.

But now, more private companies are raising fish as food for our tables. A prominent example is St. Paul–based Urban Organics, which grows local greens with Atlantic salmon and Arctic char. In southwestern Minnesota, trū Shrimp is building a saltwater facility to raise jumbo shrimp.

“In the last eight years or so, there’s been a growing interest in more intensively farming fish indoors,” says Nick Phelps, director of the University’s Minnesota Aquatic Invasive Species Research Center (MAISRC). “This is where the industry is going.”

Phelps, a specialist in infectious fish diseases, was a faculty member in the Department of Veterinary Population Medicine and worked closely with the Center for Animal Health and Food Safety until about a year and a half ago, when he was named to lead MAIRSC.

Whatever the species—whether sport fish or food fish—aquaculture creates concern for water quality. “They share water sources and the effluent goes somewhere,” says Phelps. That’s true whether fish are raised in in open ponds or closed systems of tanks or raceways. The DNR licenses aquaculture facilities—up to about 200 a year—and water appropriation permits for major water users.

State regulators also are concerned about nonnative food fish such as tilapia, which are popular food fish raised by small producers, and ornamentals such a koi and goldfish, which are favorites among hobbyists. Several of these species might escape and become invasive pests in the wild.

Species such as Arctic char or shrimp are unlikely to escape or establish a problematic presence in the wild. But concentrations of fish pose a hazard for disease. “The disease can amplify much faster and then be released into the wild,” says Phelps.

On a related issue, the capture of wild baitfish and their distribution through bait dealers can spread zebra mussel veligers, immature silver carp, and similar pests.

CAHFS and MAIRSC, along with the Minnesota Department of Natural Resources, form an informal partnership to work with private aquaculture producers to tackle concerns about water quality, fish diseases and genetics, and invasive species. By working together, the partners can more effectively confront complex policy and regulatory issues than if they were working alone.

For example, ongoing research helps to identify and track the risk of potentially disastrous diseases such as viral hemorrhagic septicemia, which has recently appeared among wild fish in the Great Lakes. Other investigations into measures such as fish vaccination will help reduce the risk of disease in farmed fish. The partners also are undertaking a quantitative risk assessment of the bait industry to identify hazards of spreading invasive species and disease.

In addition, the centers also serve as a go-between for the aquaculture industry and the regulatory responsibilities of the DNR. CAHFS in particular, can “take a step back and evaluate the pros and cons and maybe make some recommendations on how to facilitate a relationship,” says Phelps. “There’s a lot of opportunity to help support the industry and make sure it’s productive and viable going into the future.”